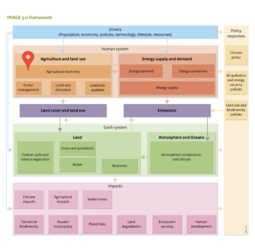 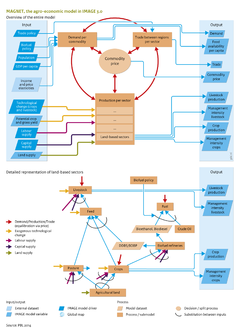 As a result of the growing world population and higher per capita consumption, production of food, feed, fibres and other products, such as bioenergy and timber, will need to increase rapidly in the coming decades. Even with the expected improvements in agricultural yields and efficiency, there will be increasing demand for more agricultural land. However, expansion of agricultural land will lead to deforestation and increases in greenhouse gas emissions, loss of biodiversity and ecosystem services, and nutrient imbalances. To reduce these environmental impacts, a further increase in agricultural yields is needed, together with other options such as reduced food losses, dietary changes, improved livestock systems, and better nutrient management.

In the IMAGE framework, future development of the agricultural economy can be calculated using the agro-economic model MAGNET (Woltjer et al., 2014). MAGNET is a computable general equilibrium (CGE) model that is connected via a soft link to the core model of IMAGE. Demographic changes and changes in income are the primary driving factors of the MAGNET model, and lead to a changing demand for all commodities including agricultural commodities. In response to this change in demand, agricultural production is increasing, and the model also takes into account changing prices of production factors, resource availability and technological progress. In MAGNET, agricultural production supplies domestic markets, and other countries and regions are supplied via international trade, depending on historical trade balances, competitiveness (relative price developments), transport costs and trade policies. MAGNET uses information from IMAGE on land availability and suitability, and on changes in crop yields due to climate change and agricultural expansion on heterogeneous land areas. The results from MAGNET on agricultural production, grassland area, and endogenous yield efficiency (i.e. management factor) changes are used in IMAGE to calculate spatially explicit land-use change, and the environmental impacts on carbon, nutrient and water cycles, biodiversity, and climate.

Although MAGNET is the standard agro-economic model used with IMAGE, other models can be linked with IMAGE. For example, the IMPACT model was used with IMAGE in the Millennium Ecosystem Assessment (Carpenter et al., 2006), and in a PBL study on protein supply, both the MAGNET and the IMPACT model were used to study the same set of scenarios. This allowed a systematic comparison between IMPACT and MAGNET (Stehfest et al., 2013). In a more recent study van Vuuren et al., 2018 the Food Demand Model (Bijl et al., 2017) was used for projections of food demand with various diets. This is a physically oriented, statistical model using based on historical relations between income, food consumption and regional differences, which is also an integrated part of the IMAGE framework.

Other land-use changes, such as infrastructure expansion, which do not require interregional links, are described in the land-use allocation model). Demand for timber is described in the forest management page.