From IMAGE
< Atmospheric composition and climate
Jump to: navigation, search 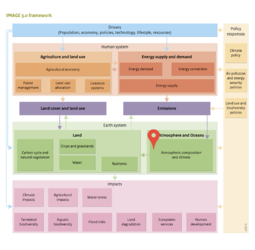 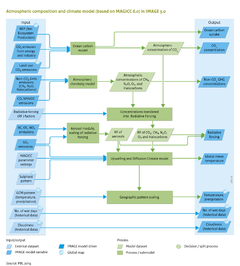 In general terms, the main uncertainties in the climate system relate to:

For CO2, there is a substantial uncertainty about how much carbon enters the ocean and the terrestrial biosphere, now and in the future, and how much remains in the atmosphere. The atmospheric concentrations of other greenhouse gases after the emission release is less uncertain and also less relevant because these gases contribute less to global climate change (Forster et al., 2007).

In terms of radiative forcing, there is little uncertainty about the long-lived greenhouse gases (CO2, CH4, N2O, and halocarbons), but AR4 identified the largest uncertainties and lowest understanding for direct and indirect aerosol effects, albedo, and tropospheric ozone (Forster et al., 2007).

IMAGE uses the mean values from AR4 as best estimates for all forcing agents (Forster et al., 2007). The uncertainty in change in global mean temperature, as derived from results of AOGCM calculations, is still quite large, with climate sensitivity likely to be in the range of 2 to 4.5 °C (with lower values very unlikely, and values above 4.5 not possible to exclude). Instead of using the best estimate of 3 °C (Randall et al., 2007), this uncertainty can be accounted for by emulating different AOGCMs with the MAGICC model.

For the spatial distribution of climate change, most models agree that the changes will be largest at higher latitudes. However, there is a large degree of uncertainty for changes in precipitation, with models even disagreeing on what would be a sign of change in many regions (Meehl et al., 2007). This uncertainty in the spatial patterns of climate change can be taken into account by applying pattern scaling for temperature and precipitation based on a range of AOGCMs in IMAGE.

In addition to CO2 concentrations and climate change, atmospheric composition is relevant in some IMAGE components. Air pollutants are used to calculate the effect on human health (Component Human development). The effect of ozone on crop yields has been explored but is not yet part of the standard model set-up (Chuwah et al., 2015).

Although coupling to an AOGCM is not workable for integrated assessments, some IAMs use an Earth System Model of intermediate complexity for climate modelling. This allows for more detail and consistency in climate change impacts and feedbacks, but is fixed to one representation of the system, not accounting for the large uncertainties. Using the simple climate model MAGICC 6.0 enables research on the consequences of parameter values outside current emulated AOGCMs. For example, the impact of high climate sensitivity values beyond the range found in AOGCMs (2 to 4.5 °C) can be studied (Müller et al., 2016b). This extends the range of uncertainty covered by the IMAGE model in projections of future climate change and the related impacts.