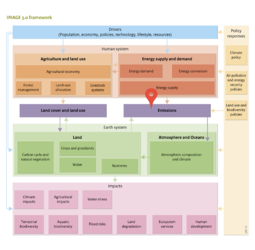 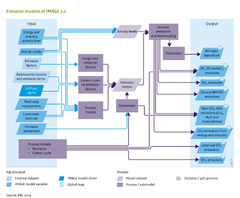 Flowchart Emissions. See also the Input/Output Table on the introduction page. Anthropogenic sources, for natural sources see Table 5.2.2. More detail on inputs and outputs, and how they link to other IMAGE components is presented at the end of this section (Emission table).

Air pollution emission sources included in IMAGE are listed in Emission table, and emissions transported in water (nitrate, phosphorus) are discussed in Component Nutrients. In approach and spatial detail, gaseous emissions are represented in IMAGE in four ways:

The simplest way to estimate emissions in IMAGE is to use global estimates from the literature. This approach is used for natural sources that cannot be modelled explicitly (Emission table).

Past and future developments in anthropogenic emissions are estimated on the basis of projected changes in activity and emissions per unit of activity (Figure Flowchart).

The equation for this emission factor approach is:

where:
The emission factors are time-dependent, representing changes in technology and air pollution control and climate mitigation policies.

The emission factor is used to calculate energy and industry emissions, and agriculture, waste and land-use related emissions. Following Equation 1, there is a direct relationship between level of economic activity and emission level. Shifts in economic activity (e.g., use of natural gas instead of coal) may influence total emissions. Finally, emissions can change as a result of changes in emission factors (EF) and climate policy (AF).
Some generic rules are used in describing changes in emissions over time (see further). The abatement factor (AF) is determined in the climate policy model FAIR (see Component Climate policy). The emission factor approach has some limitations, the most important of which is capturing the consequences of specific emission control technology (or management action) for multiple gas species, either synergies or trade-offs.

GEF is a special case of the EF method, where a proxy distribution is used to present gridded emissions. This is done for a number of sources, such as emissions from livestock (Emission table).

Land-use related emissions of NH3, N2O and NO are calculated with grid-specific models (Figure Flowchart). The models included in IMAGE are simple regression models that generate an emission factor (Figure Flowchart). For comparison with other models, IMAGE also includes the N2O methodology generally proposed by IPCC (IPCC, 2006).

The approaches used to calculate emissions from energy production and use, industrial processes and land-use related sources are discussed in more detail below.

Emissions from energy production and use

Emission factors (Equation 1) are used for estimating emissions from the energy-related sources (Emission table). In general, the Tier 1 approach from IPCC guidelines (IPCC, 2006) is used. In the energy system, emissions are calculated by multiplying energy use fluxes by time-dependent emission factors. Changes in emission factors represent, for example, technology improvements and end-of-pipe control techniques, fuel emission standards for transport, and clean-coal technologies in industry.

Future emission factors are based on the following rules:

In IMAGE, EKC is used as an empirically observed trend, as it offers a coherent framework to describe overall trends in emissions in an Integrated Assessment context. However , it is accepted that many driving forces other than income influence future emissions. For instance, more densely populated regions are likely to have more stringent air quality standards. Moreover, technologies developed in high-income regions often tend to spread within a few years to developing regions. The generic equations in IMAGE can capture this by decreasing the threshold values over time. For CO2 and other greenhouse gases, such as halogenated gases for which there is no evidence of EKC behaviour, IMAGE uses an explicit description of fuel use and deforestation.

The methodology for EKC scenario development applied in the energy model is based on two types of variables: income thresholds (2–3 steps); and gas- and sector-dependent reduction targets for these income levels. The income thresholds are set to historical points: the average OECD income at which air pollution control policies were introduced in these countries; and current income level in OECD countries. The model assumes that emission factors will start to decline in developing countries, when they reach the first income threshold, reflecting more efficient and cleaner technology. It also assumes that when developing countries reach the second income threshold, the emission factors will be equal to the average level in OECD regions. Beyond this income level, the model assumes further reductions, slowly converging to the minimum emission factor in OECD regions by 2030, according to projections made by IIASA under current legislation (current abatement plans). The IMAGE rules act at the level of regions, this could be seen as a limitation, but as international agreements lead countries to act as a group, this may not be an important limitation.

For the industry sector, the energy model includes three categories:

CO2 exchanges between terrestrial ecosystems and the atmosphere computed by the LPJ model are described in Carbon cycle and natural vegetation. The land-use emissions model focuses on emissions of other compounds, including greenhouse gases (CH4, N2O), ozone precursors (NOx, CO, NMVOC), acidifying compounds (SO2, NH3) and aerosols (SO2, NO3, BC, OC).

For many sources, the emission factor (Equation 1) is used (Emission table). Most emission factors for anthropogenic sources are from the EDGAR database, with time-dependent values for historical years. In the scenario period, most emission factors are constant, except for explicit climate abatement policies (see below).

There are some other exceptions: Various land-use related gaseous nitrogen emissions are modelled in grid-specific models (see further), and in several other cases, emission factors depend on the assumptions described in other parts of IMAGE. For example, enteric fermentation CH4 emissions from non-dairy and dairy cattle are calculated on the basis of energy requirement and feed type (see Component Livestock systems). High-quality feed, such as concentrates from feed crops, have a lower CH4 emission factor than feed with a lower protein level and a higher content of components of lower digestibility. This implies that when feed conversion ratios change, the level of CH4 emissions will automatically change. Pigs, and sheep and goats have IPCC 2006 emission factors, which depend on the level of development of the countries. In IMAGE, agricultural productivity is used as a proxy for the development. For sheep and goats, the level of development is taken from EDGAR.

A special case is N2O emissions after forest clearing. After deforestation, litter remaining on the soil surface as well as root material and soil organic matter decompose in the first years after clearing, which may lead to pulses of N2O emissions. To mimic this effect, emissions in the first year after clearing are assumed to be five times the flux in the original ecosystem. Emissions decrease linearly to the level of the new ecosystem in the tenth year, usually below the flux in the original forest. For more details, see Kreileman and Bouwman (1994).

Land-use related emissions of NH3, N2O and NO are calculated withgrid-specific models.N2O from soils under natural vegetation is calculated with the model developed by Bouwman et al. (1993). This regression model is based on temperature, a proxy for soil carbon input, soil water and oxygen status, and for net primary production. Ammonia emissions from natural vegetation are calculated from net primary production, C:N ratio and an emission factor. The model accounts for in-canopy retention of the emitted NH3 (Bouwman et al., 1997).

For comparison with other models, IMAGE also includes the N2O methodology proposed by IPCC (2006). This methodology represents only anthropogenic emissions. For emissions from fertilizer fields this is the emission from a fertilized plot minus that from a control plot with zero fertilizer application. For this reason, soil emissions calculated with this methodology cannot be compared with the above model approaches, which yields total N2O emissions.