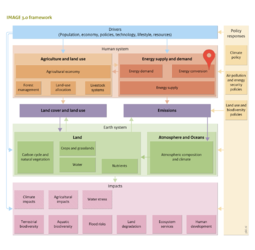 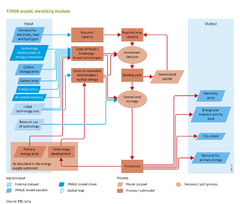 In TIMER, electricity can be generated by 28 technologies. These include the VRE sources solar photovoltaics (PV), concentrated solar power (CSP), and onshore and offshore wind power. Other technology types are natural gas-, coal-, biomass- and oil-fired power plants. These power plants come in multiple variations: conventional, combined cycle, carbon capture and storage (CCS) and combined heat and power (CHP). The electricity sector in TIMER also describes the use of nuclear, other renewables (mainly geothermal power) and hydroelectric power. (De Boer and Van Vuuren, 2017)

As shown in the flowchart, two key elements of the electric power generation are the investment strategy and the operational strategy in the sector. A challenge in simulating electricity production in an aggregated model is that in reality electricity production depends on a range of complex factors, related to costs, reliance, and technology ramp rates. Modelling these factors requires a high level of detail and thus IAMs, such as TIMER, concentrate on introducing a set of simplified, meta relationships (Hoogwijk, 2004; Van Vuuren, 2007; De Boer and Van Vuuren, 2017).

The electricity generation capacity required to meet the demand per region is based on a forecast of the maximum annual electricity demand plus a reserve margin. The reserve margin consists of a general reserve margin of 10-20% plus a compensation for imperfect capacity credits (the reliability of a plant type to supply power during the peak hours) of existing capacity. The maximum annual demand is calculated on the basis of an assumed shape of the load duration curve (LDC) and the gross electricity demand. The latter comprises the net electricity demand from the end-use sectors plus electricity trade and transmission losses. An LDC shows the distribution of load over a certain timespan in a downward form. The peak load is plotted to the left of the LDC and the lowest load is plotted to the right. The shape of the LDC is based on work by Ueckerdt et al. (2016), who derived regional normalized residual LDCs (RLDC) for different solar and wind shares, including the application of optimized electricity storage.

The final demand for new generation capacity is equal to the difference between the required and existing capacity. Power capacity is assumed to be replaced at the end of its lifetime, which varies from 25 to 80 years, depending on the technology.

Capacity can also be decommissioned before the end of the technical life time. This so-called early retirement can occur if the operation of the capacity has become relatively expensive compared to the operation and construction of new capacity. The operational costs include fixed O&M, variable O&M, fuel and CCS costs. Capacity will not be retired early if the capacity has a backup role, characterized by a low load factor resulting in low operational costs. (De Boer and Van Vuuren, 2017)

Decisions to invest in specific options

In the model, the decision to invest in generation technologies is based on the levelized cost of electricity (LCOE; in USD/kWhe) produced per technology, using a multinomial logit equation that assigns larger market shares to the lower cost options.

An important variable used in determining the LCOE is the amount of electricity generated. Often, the LCOEs of technologies are compared at maximum full load hours. However, only a limited share of the installed capacity will actually generate electricity at full load. This effect is captured in a heuristic: 20 different load bands have been introduced to link the investment decision to expected dispatch. The different load bands are distributed among the LDC, resulting in a load factor for each load band. The inclusion of different load factors for each load band means that less capital-intensive technologies are attractive to use for lower load factor load bands. These are likely to be gas-fired peaker plants. For load bands with higher load factors, the electricity submodule chooses technologies with lower operational costs. These are likely to be base load plants, such as coal-fired or nuclear power plants. A system with more VRE sources will result in lower load factors and therefore in a higher demand for peak or mid load technologies. (De Boer and Van Vuuren, 2017)

The standard costs of each option can be broken down into several categories: investment or capital cost; fuel cost; fixed and variable operational and maintenance costs; construction costs; and carbon capture and storage costs.

The exceptions are hydropower, other renewables and CHP. Hydropower and other renewables are exogenously prescribed, because of a lack of available data or because technologies like large hydropower plants often have additional functions such as water supply and flood control. The demand for CHP capacity is heat demand driven. (De Boer and Van Vuuren, 2017)

Finally, in the equations, some constraints are added to account for limitations in supply, for example restrictions on biomass availability. For a more detailed description on electricity sector investments in TIMER, see De Boer and Van Vuuren, 2017).

The demand for electricity is met by the installed capacity of power plants. The available capacity is used according to the merit order of the different types of plants; technologies with the lowest variable costs are dispatched first, followed by other technologies based on an ascending order of variable costs. This results in a cost-optimal dispatch of technologies. The dispatch of VRE is described by the RLDC dataset. CHP dispatch is distributed based on monthly heating degree days. Within each month, the CHP load stays constant.

The structure of the hydrogen generation submodule is similar to that for electric power generation (Van Ruijven et al., 2007) but with following differences:

See the additional info on Grid and infrastructure.