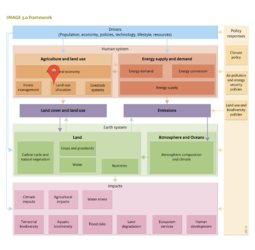 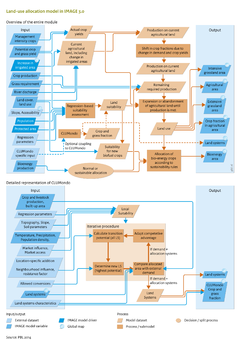 As the starting point for the simulation in 1970, HYDE land use data were aggregated to dominant land use types on a 5 minute grid scale. For the period 1970–2005, the model can either allocate land use based the dynamic behaviour described above, or be constrained by the HYDE land use map in 2005. The latter option is used mainly when specific impact models require a close match between IMAGE land-use patterns and observations in 2005 (Hurtt et al., 2011). Other data sources include maps of protected areas (UNEP, 2011), accessibility (Nelson, 2008), and irrigated areas (Siebert et al., 2005), all aggregated to the IMAGE 5 minute grid. The trend for future irrigated areas is often based on FAO projections (Alexandratos and Bruinsma, 2012).

The main uncertainty in land-use allocation obviously relates to the location of new agricultural land and land abandonment, and the effect on impacts and feedback. Global land-use change models are rarely validated, because adequate data for evaluation are not available. For instance, differences in satellite-based land-use maps for different time steps often relate to differences in methodologies, rather than to real transformation processes (Hansen et al., 2008). However, the need for evaluation is increasingly acknowledged, and with improved data availability, such assessments now become possible (Hansen et al., 2013).

Impacts and feedbacks of land-use change depend to differing degrees on the location. For carbon emissions, the vegetation type and carbon content at the location of agricultural expansion is decisive, while the exact location of the new land is less relevant. Likewise for feedback to agricultural production, the attainable crop yields are more relevant than the exact location. Some impacts, e.g. on biodiversity depend more on small-scale processes and landscape composition, which are currently not included in most integrated assessment models. To evaluate the IMAGE land-use allocation model, the simulated locations of new agricultural land need to be compared to empirical data on land cover transitions, or to maps of land-cover change (e.g. Hansen et al., 2013).

Another key uncertainty is the relation between agricultural intensification of expansion, when demand increases. So far, their relative contribution is calculated in MAGNET, but could be informed by the smaller scale land system models.

A key limitation of the current land-use allocation model is the limited feedback to the agricultural economy. The suitability of land feeds back to agricultural production only for regional averages. The spatial heterogeneity of land management in a region, which determines many environmental impacts such as nutrient imbalances and biodiversity, can be addressed by using the CLU-Mondo module.