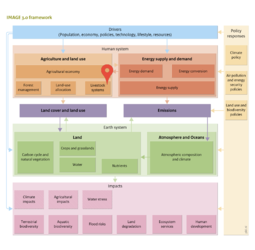 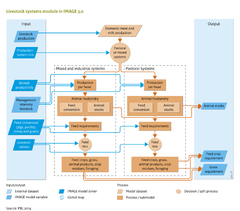 IMAGE distinguishes two livestock production systems for ruminants (i.e. beef, dairy cattle, sheep and goats), namely pastoral systems, and mixed and industrial systems, based on FAO (Seré and Steinfeld, 1996). Pastoral systems are mostly dominated by extensive ruminant production, while mixed and industrial systems are more intensive. The distribution of livestock production in the two systems is constructed from historical data for the years up to the present, and for future years will depend on the scenario selected.

For the main monogastric sectors pigs and poultry IMAGE distinguishes three livestock systems. For pigs these are backyard, intermediate and intensive systems, and for poultry these are backyard, broiler and laying hens systems (Lassaletta et al., 2019). Both models consists of four modules: production, herd, energy and nitrogen module.

IMAGE distinguishes five types of livestock, that is, beef, dairy cattle (large ruminants), the category sheep & goats (small ruminants), pigs, and poultry (monogastrics). The numbers of animals and the proportion per production system are calculated from data on domestic livestock production per region provided by the agro-economic model MAGNET (Agricultural economy). The number of animals for the ruminants is calculated from the total production per region and the characteristics of the livestock systems in that region. Stocks of dairy cows (POP) per country and world region are obtained from total milk production (PROD) and milk production per animal (MPH).

Animal stocks per region of beef cattle and sheep and goats are obtained from production and carcass weight (CW) and off-take rate (OR):

Historical data on milk production per cow, off-take rate, and carcass weight are obtained from statistics, and values for future years will depend on the scenario selected.

The production module of pigs and poultry determines the amount of meat (and eggs for the poultry system). The herd modules contains for pigs 11 different cohorts for each system to determine the number of animals needed for a given meat (and eggs) production, and three cohorts for the broiler systems.

Energy requirements for cattle, pigs and poultry are based on animal activity and production. For sheep and goats Feed Conversion Ratios (FCR) are used. This is the amount of feed (kg dry matter) required to produce one kilogram of milk or meat. The FCR values are based on historical data and values for future years will depend on the scenario selected.

In pastoral ruminant production systems, the feed is almost entirely grass except in developing regions where foraging constitutes a larger but variable proportion of the total feed. Pigs and poultry are fed feed crops and by-products, crop residues and fodder. Since these animals are mainly farmed in mixed systems, the contribution of feed crops and residues to the total feed in these systems is much higher than in pastoral systems.

The required feed crop production per animal is calculated from feed rations, and this information is incorporated into the agro-economic model (Agricultural economy). The proportion of grass in feed rations determines total grass consumption. The amount of grassland area required, and the corresponding grazing intensity are based on the Agricultural economy module.