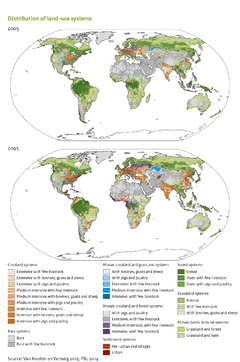 ClUMondo: Dynamics of land-use expansion and intensification differ across regions.

In cooperation with Wageningen University, the IMAGE team initiated the development of a more detailed land-use model (Letourneau et al., 2012). This finally resulted in the construction of CLUMondo at the VU University Amsterdam, which is optionally linked to IMAGE 3.0. CLUMondo includes data on landscape composition and heterogeneity, and land-use intensity (Van Asselen and Verburg, 2012; Van Asselen and Verburg, 2013). The model uses land systems, a concept that combines data on land cover (cropland, grassland, forest, built-up area, bare land), livestock density and agricultural intensity. These characteristics are combined in 30 land system classes (see figure).

Logistic regressions between a range of biophysical and socioeconomic indicators, and the land systems are used to determine spatially explicit suitability for these systems. In combination with additional settings on neighbourhood effects, location-specific additions and a set of rules on conversion resistance, CLUMondo uses this suitability to model land system changes (see bottom flowchart). The resulting maps of land systems, with their specific characteristics on land-cover areas, livestock density, and agricultural intensity describe changes in land system dynamics over time, and can be used directly in impact models.

CLUMondo is optionally linked to IMAGE, and the change in land systems can be used as an additional suitability criterion. Fractions of crops and intensive grasslands from CLUMondo are re-arranged in 30 minutes grid cells to dominant 5 minutes crop cells, which are then given a very high suitability ranking in IMAGE to ensure these cells are converted first. In this way, IMAGE follows the dynamics of CLUMondo in terms of location of new or abandoned agricultural land, and tries to make agricultural areas and agricultural expansion in IMAGE and CLUMondo consistent on a 30 x 30 minutes resolution.