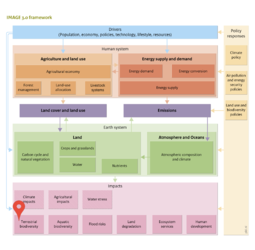 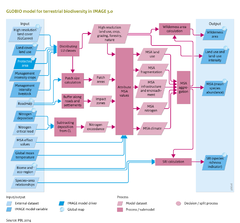 The GLOBIO model is used regularly to evaluate biodiversity impacts under baseline scenarios. Although the biodiversity decline depends on scenario assumptions, these studies all project decline in coming decades at a similar rate as in the previous decades. The main drivers of biodiversity loss are land-use change, infrastructure expansion and, increasingly, climate change (the figure below). 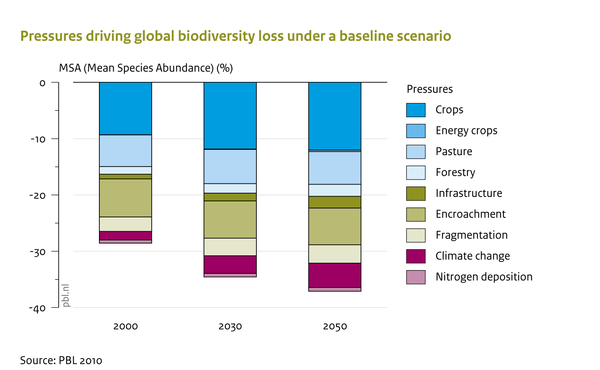 Land-use change and encroachment are projected to remain the most important drivers of biodiversity loss, but climate change will also become a significant pressure.

Biodiversity loss is caused by a wide range of activities in various sectors, and policy interventions in major sectors could prevent or reduce biodiversity loss. The most often suggested option is protection of specific nature areas (reserves) to prevent further habitat loss for selected ecosystems. In addition, land pressure could be reduced, for example, by intensification of production, a shift in the human diet to fewer animal products, and waste reduction. The impact of climate change on biodiversity reduces with effective mitigation policies in place. Increase in sustainable forests may also reduce biodiversity loss in the long term.

The Rethinking Biodiversity Strategies study (PBL, 2010) evaluated a series of options (the figure below) and shows that several options need to be introduced to significantly reduce biodiversity loss. Several interactions were found between these options. In some cases, the combined effect is smaller than if measures are taken individually. In other cases, synergistic effects were noted, for example, creating nature reserves may lead to higher crop prices, and in combination with yield improvements may prevent biodiversity loss without negative impact on crop prices. Analyses in Rethinking Biodiversity Strategies (PBL, 2010) and Rio+20 (PBL, 2012) also show that, up to 2030, further biodiversity loss cannot be prevented completely, but can be halted after 2030 with ambitious policy action. 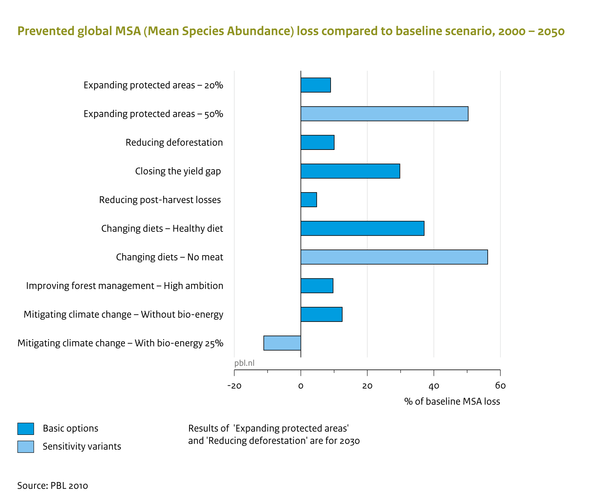 Several policy interventions in land-use regulation, production and demand systems could prevent some of the biodiversity loss projected in the baseline. The single largest effects can be expected from closing the yield gap, and from dietary changes.