Key model inputs are descriptions of the future development of so-called direct and indirect drivers of global environmental change. These include population, economic development, lifestyle, policies and technology change (Drivers Component). Most drivers such as technology change are input in various IMAGE components (see Table of drivers). To ensure that exogenous assumptions made about these factors are consistent, brief scenario storylines are formulated on how the future may unfold and are used to derive internally consistent assumptions for main driving forces. For example, yield assumptions in the agricultural economy model and performance of solar power production in the energy model depend on a more generic description of the rate of technology change. Population and economic development can be provided as quantitative outputs from external sources or models, and dealt with quantitatively as exogenous model drivers. Other drivers mostly concern assumptions in other parts of IMAGE.

For population, IMAGE uses exogenous assumptions, such as total population per region, household size and urbanisation rate. However, GISMO population projections can also be used, which enable feedback on environmental factors, such as air pollution and undernourishment on population growth to be taken into account (Component Human development). Exogenous assumptions are used for economic variables, such as GDP. In most studies, economic projections are developed by macroeconomic models based on the scenario storylines. Sector-specific economic indicators and household consumption can be derived directly from such models, and complemented by income categories, reflecting the GINI coefficient, a measure of disparity in income distribution.

Example: In the Rio+20 study (PBL, 2012), global population is based on the UN medium projection and grows to about 9 billion people in 2050, the increase occurring mostly in developing countries (the figure below). The economic projection of the Rio+20 study shows that developing countries increasingly dominate the world economy in terms of total GDP (the figure below). For the OECD countries, the baseline scenario assumes a long-term economic growth rate of 1 to 2% per year over the whole scenario period. In the short term, per capita growth rates in Asia and Latin America are much higher, but converge gradually to a long-term growth rate of around 2% per year. In contrast, Africa shows a later peak in economic growth. 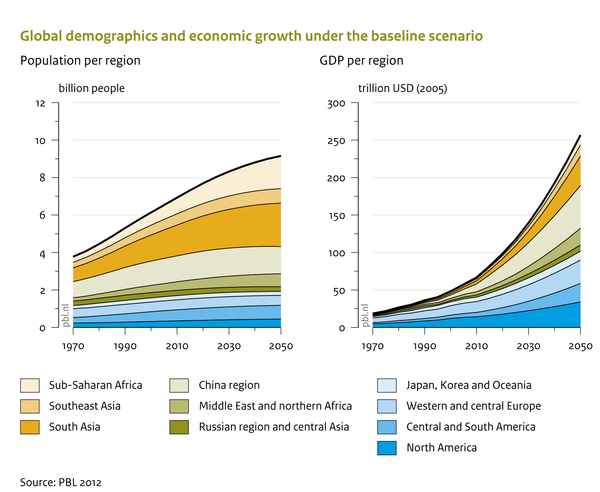 Trends in population and income.
Retrieved from "https://models.pbl.nl/image/index.php?title=IMAGE_framework_summary/Drivers&oldid=36633"
Category: