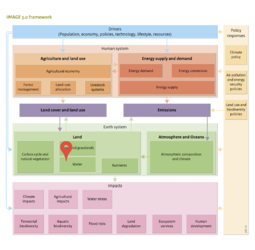 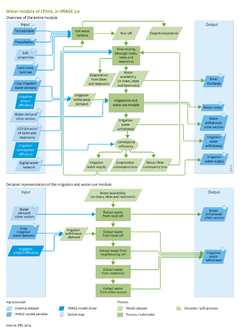 The hydrological model of IMAGE is closely linked to the model on natural vegetation, crop and carbon cycles (see C cycle and natural vegetation dynamics; Crop and grassland model), because all those submodels are represented in LPJmL, which is a global hydrology and vegetation model (Sitch et al., 2003; Bondeau et al., 2007). An overview of data exchanges with other IMAGE modules is given in *******Table 6.3.1. Data on annual land cover and land use are used as input into LPJmL, including information on the location of irrigated areas and types of crops. This influences the amounts of water that evaporate and run off, as well as the amount of water needed for those irrigated areas. Vice versa, information on water availability as calculated by LPJmL is taken into account by the land allocation model to find suitable locations for the expansion of irrigated areas. Climate is used as an input into LPJmL to determine reference evapotranspiration, and the precipitation input to the water balance (Gerten et al., 2004). The crop model, which is also part of LPJmL (Crop and grassland model), calculates irrigation water demand based on crop characteristics, soil moisture and climate. If the amount of water available for irrigation is limited, the crop model calculates the reduction in crop yield due to water stress.