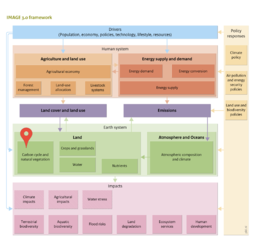 The terrestrial biosphere plays a key role in global and regional carbon cycles and thus in the climate system. Large amounts of carbon (between 2000 and 3000 PgC) are stored in the vegetation and soil components. Currently, the terrestrial biosphere absorbs about 30% of emitted CO2 (Ballantyne et al., 2012), and this carbon sink can be maintained and even enhanced by, for instance, protecting established forests and by establishing new forests (Van Minnen et al., 2008). However, deforestation and other land use changes in the last few centuries have contributed considerably to the build-up of atmospheric carbon dioxide (Van Minnen et al., 2009; Houghton, 2010) and this trend is projected to continue Müller et al., 2007).

Regardless of land cover and land use, the net carbon sink in the terrestrial biosphere is affected by a range of environmental conditions such as climate, atmospheric CO2 concentration and moisture. These conditions influence processes that take up and release CO2 from the terrestrial biosphere such as photosynthesis, plant and soil respiration, transpiration, carbon allocation and turnover, and disturbances such as fires.

In plant photosynthesis, CO2 is taken from the atmosphere and converted to organic carbon compounds. This CO2 conversion is referred to as gross primary production (GPP). The sequestered carbon is needed for plant maintenance and growth (autotrophic respiration), and for the development of new plant tissues, forming live biomass carbon pools. All plant parts (including leaf fall and mortality) are ultimately stored as carbon in carbon pools in the soil and atmosphere. CO2 is also emitted from the soil pools to the atmosphere in the process of mineralisation.

The IMAGE-2 carbon cycle and biome model (Klein Goldewijk et al., 1994; Van Minnen et al., 2000) have been replaced by the Lund-Potsdam-Jena model with Managed Land (LPJmL) model (Sitch et al., 2003; Gerten et al., 2004; Bondeau et al., 2007). An overview of the LPJmL model in the IMAGE context with regard to carbon and biome dynamics is presented here; the model and a sensitivity analysis is described in detail by Muller et al. (2016).