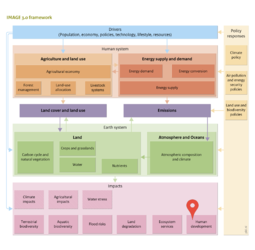 The GISMO model has been used to evaluate various baseline scenarios, including that for the Rio+20 study (PBL, 2012). In most of these scenarios, access to food, improved drinking water, basic sanitation and modern energy sources all increase significantly up to 2050. Yet, even under large increases in access levels, a significant proportion of the population will still be without adequate services, mainly in Sub-Saharan Africa and South Asia. By 2050, around 300 million people will live below a minimum level of food energy consumption, 250 million without sustainable access to safe drinking water, 1.4 billion without basic sanitation and 1.9 billion without access to modern energy sources for cooking and heating. Global child mortality is projected to reduce significantly, from 67 deaths per 1000 children born in 2010 to fewer than 45 by 2030 and 28 by 2050, with large improvements in all world regions (Figure below). To comply with the MDG on child mortality (MDG4), the under-five mortality rate should be reduced by two-thirds, between 1990 and 2015. Without new policies, this target will not be achieved, mainly due to persistent high levels of child mortality in Sub-Saharan Africa and South Asia (see also PBL, 2009). 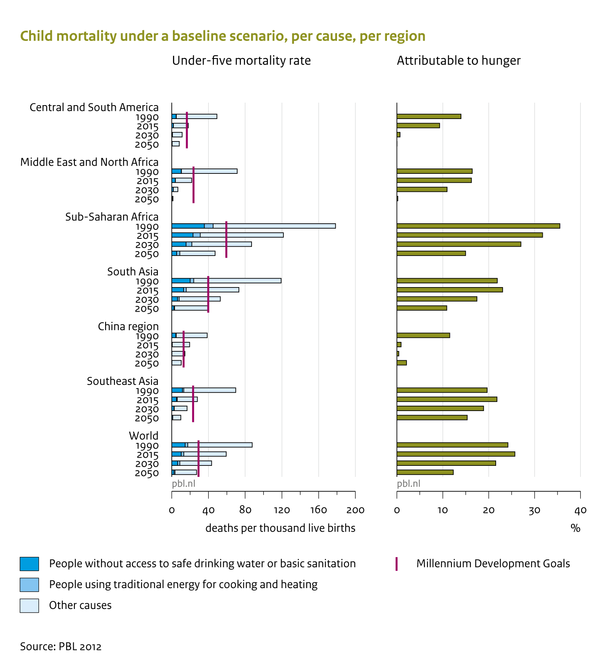 Policy interventions to decrease human health loss and child mortality rates can be classified as # prevention through eliminating or reducing health risks;

Prevention in order to eliminate or reduce health risks is generally implemented by:

GISMO addresses access to drinking water and sanitation, quality of access and behavioural issues. Access to food and energy and mitigating environmental changes is addressed in other components of the IMAGE framework. GISMO can be used to explore how sustainability goals related to human well-being, such as reducing under-five mortality, can be achieved (Figure below). In a recent study, two scenarios were developed (PBL 2012). In the first scenario (‘global technology’) full access to food, water and energy is induced. In this scenario, all people will have access to modern energy sources for cooking and heating by 2030 by subsidising modern energy sources and distributing improved biomass stoves. Furthermore, all people will have access to safe drinking water and improved sanitation by 2050 (exogenous assumption). Finally, hunger will be eradicated by 2050 by increasing global food production, specifically targeting staples such as wheat, rice and other cereals. The second scenario (‘challenge + ‘) adds quality of access with respect to water and energy and assumes full enrolment of girls in secondary education by 2030.

As a result of the policy interventions described above, global child mortality rates are projected to decline by 12% by 2030, and by more than 26% by 2050, in the ‘global technology’ scenario compared to the baseline scenario (Figure below). The additional policies in the second scenario are stylised in the sense that they are not calculated using the full modelling framework and, therefore, do not take into account all socioeconomic and environmental constraints. Under this scenario, child mortality delines by almost 25% by 2030 and by 34% by 2050, compared to the baseline scenario. However, in neither of the two scenarios MDG4 is achieved.