Difference between revisions of "Land degradation" 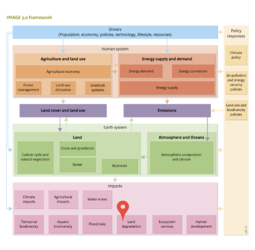 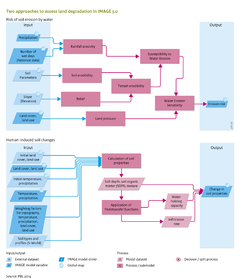 Land degradation is human-induced damage to ecosystems leading to a sustained loss of capacity. This is a serious and widespread problem leading ultimately to loss of arable land, and to demand for new arable land to compensate for decline in production on existing land. A key symptom of land degradation is loss of organic carbon from soils and vegetation, also contributing to global greenhouse gas emissions. The key mechanisms in land degradation are soil erosion (by water and wind), compaction, salinization, nutrient depletion, structural decay and contamination. The main causes are deforestation, land conversion, inadequate agricultural land use and management, and construction (urbanisation, road construction).

In 2012, the UN Convention to Combat Desertification (UNCCD) formulated the goal to achieve zero net land degradation as a Sustainable Development Goal for Rio+20 ‘to secure the contribution of our planet’s land and soil to sustainable development, including food security and poverty eradication’ (UNCCD, 2012). Land degradation is also relevant to the other Rio Conventions, with one of the Aichi targets of the Convention on Biological Diversity (CBD) aiming to restore at least 15% of degraded ecosystems.

While recognized as a global threat, the impacts of land degradation are poorly understood, and studies report differing results. For instance, productive soil loss equals 15 million km2 according to Rozanov et al., 1990, while FAO reports about 43 million km2 moderately to severely degraded land because of soil quality loss, water resource depletion and biodiversity loss (FAO, 2011a). As a result, the impacts on productivity and economic losses with consequences for food security are also very uncertain. In the same way, the costs and benefits of investments to prevent land degradation and to restore degraded areas are also largely unknown (Nkonya et al., 2011). Many reasons for these discrepancies and knowledge gaps are identified (Bindraban et al., 2012), including uncertainty about data, ambiguous definitions of land degradation, and methodology weaknesses in attributing changes in ecosystems to land degradation or to other causes.

Although a comprehensive model to capture the complex system interactions is not readily available, IMAGE 3.0 offers the following approaches to address soil degradation:

A. Water Erosion Risk: Risk assessment of soil erosion caused by water based on the Universal Soil Loss Equation (USLE; Wischmeier and Smith(1978)).